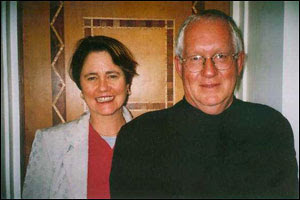 
In July 2002, Jan Kemp approached Alan Smythe, the Director of SCAPA [School of Creative and Performing Arts] at the University of Auckland, about the possibility of their creating an archive of spoken poetry. In 1974, together with Dr Jonathan Lamb, the two of them had teamed up to produce Waiata Recordings’ three LP record albums, New Zealand Poets Read their Work and New Zealand Poets Read their Work for Children, which were a sell-out success to schools, universities and libraries.

The plan was to complete and release this new, updated archive by 2004, three decades post-Waiata Recordings. Jan Kemp accordingly began to compile a list of poets to invite to read. The first recordings began at the time of the AUP Seeing Voices festival in August 2002, when some poets coming from other centres were able to record at SCAPA, along with local Auckland poets. However, it soon became apparent more studios in the other three major centres would be needed to record poets locally, as no-one was able to fund trips to SCAPA solely for that purpose.

So, using SCAPA as home base for the archive, Jan organised the use of regional studios (listed in the acknowledgements), as well as appointing regional co-ordinators in Wellington (Elizabeth Alley), Christchurch (David Howard and Morrin Rout) and Dunedin (Nick Ascroft and Richard Reeve). The work of collection was well under way by December 2002, when Alan Smythe’s term at SCAPA ended.

Having received a Creative New Zealand grant for the archive in mid-2003, Jan Kemp was able to invite Jack Ross to become the textual editor and later co-director of the archive. He began editing the texts of the spoken poems, and continued doing so throughout 2003 and into 2004. He was greatly assisted in this by the archive’s research assistant Edmund King, who was employed by means of a research grant for further work on the archive obtained by Associate Professor Ken Larsen, head of the University of Auckland English Department. Edmund worked on the project based in the Special Collections department of the University of Auckland Library, where all the originals of the archive will eventually be housed.

Emphasis should also be laid here on the technical expertise of Mark King, from the University of Auckland’s Multimedia Teaching Support Unit, who established order in a labyrinth of sound recordings from studios all over the country. Jan assisted Mark in ensuring that the digital audio texts of the recorded poems correlate with the electronic texts and support materials compiled by Jack and Edmund. Mark was assisted in the final burning of the audio discs by Jeannette McKerchar, also of MTSU.

At the time of writing, a little over two years after the idea was first broached, 40 CDs of audio tracks have been recorded and edited, 2 CDs of playlists and edited texts (incorporating 171 files in 23 alphabetical folders), photographs, biographical notes and bibliographies have been compiled for each participant.


The choice of poets was, from the beginning, intended to be as wide as possible. Everyone included has some reputation as a poet in either the written or spoken medium, but the inclusion of performance poets has meant that the requirement to have published a book or a substantial number of poems in periodicals has (in several cases) been waived.

The selection of poems was left entirely up to the poets, within a loose time-frame (roughly twenty minutes apiece). It is believed that this adds extra interest to the collection, as it represents each writer’s own idea of their strongest work. Some ranged widely in time; others chose to include only their very latest poems. No introductions or parenthetical comments are included in the archive, though some have been preserved on the raw recordings which will be deposited in the Special Collections department of the University of Auckland Library with the rest of the original materials.

As well as living poets, it was decided to include poets no longer living who had still been active in the last years of the twentieth century. With the kind permission of Waitakere City Council and the Going West Books and Writers Festival organizers Murray Gray and Rose Yukich, as well as his literary executors Jeny Curnow, Tim Curnow and Elizabeth Caffin, Jan Kemp was able to make copies of recordings made at the festivals in 1999 and 2000 by Allen Curnow. Michele Leggott, founder and director of nzepc, together with Sally Rodwell and Martin Edmond, his literary executors, kindly gave permission for recordings made by Alan Brunton to be placed in the Archive. Elizabeth Caffin of AUP kindly gave permission for recordings made by Lauris Edmond to be copied from her CD The Poems of Lauris Edmond (Auckland, AUP, 2000). In addition, Frances Edmond, Lauris’s daughter and literary executor read a selection from Late Song, (Auckland, AUP 2000) Lauris’s last published book of poems. Margaret Edgcumbe gave permission for recordings of poems read by Kendrick Smithyman in a video interview with Peter Simpson and Mac Jackson, Closing the Chocolate Factory (Auckland, December 1995) to be copied.

All of the poets who participated in the project were each asked to bring with them, at the time of recording:

• hard-copies of the poems they read
• a brief, one page biographical / bibliographical summary of their literary careers to date
• a copyright sheet, including publication details for each of the poems.

Those with access to computers were also asked to send a floppy disc with these materials in electronic form, the intention being to make a CD of text files to match the 40 CDs of audio tracks in the sound archive proper.

It seemed desirable that these texts should be saved in a uniform format for ease of consultation. Times New Roman 12-point type was chosen, as the most standard font available. Extremely narrow margins were also used to allow maximum space for long-lined poems. Every endeavour has, however, been made throughout to preserve any distinctive spacing and orthographical pointing (italics, bold or capital letters) in the original texts.


Then come the texts themselves, with a page-break after each poem, then the brief bio-biblio.

Each alphabetical folder also contains a file (A-Lists, B-Lists etc.) containing publication details for each poet (these are accurate according to the copyright information provided to us at the time of recording – however, no systematic attempt has been made to track every subsequent publication of the 2,000-odd poems in the archive):

Titles of poems read (in this order): / Published (title of work, publisher, date)


The scope of the project is a little difficult to grasp at first glance, so a tabular break-down has been provided. There are 171 poets, arranged in 23 alphabetical folders (no surnames begin with U, X or Z). The more-than-2,000 tracks have been edited into 3,000-odd pages of electronic text – by far the largest anthology of New Zealand poets and poetry ever compiled.


Thanks to the poets (and literary executors of poets) who have granted permission for recordings and texts to be deposited in this archive – under the following strict terms of access:

• The material will only be made available within a library under the supervision of a librarian for the purposes of research and private study.
• Copies of works will only be made by library staff after satisfying themselves that the request falls strictly within the “private study and research” category.
• No other copies of any works in the Archive may be made without the written permission of copyright owners.

Thanks also to those publishers who have granted permission for this reproduction of previously-published work. Every effort has been made to trace the latest copyright holders, but if any omissions have been made in this regard, we will be happy to deposit any revised information communicated to us with the rest of the copyright documentation held in the Special Collections department of the University of Auckland Library.

Other advisors at various stages of the project have included Michael Sumpter, Richard Niven, Grant Wills and Melanie Johnson.


Further information on the project can be found on our online feature page: