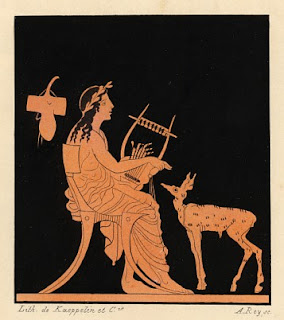 
The so-called “Catalogue of Ships” in Book 2 is one of the most fascinating sections of Homer’s Iliad. Generations of editors – and careful readers – have noted that it significantly contradicts other parts of the epic.

In the nineteenth century, this was seen as proof of multiple authorship: the many poets hidden under the single generic label “Homer”. In the twentieth, with the rediscovery of pre-Classical Greek culture by the archaeologists Heinrich Schliemann and Sir Arthur Evans, it became clear that virtually every place listed in Book 2 has significant Mycenaean remains nearby. And this includes many sites which had sunk into obscurity by Homer’s day, five centuries after the putative date of the Trojan War.

In other words, it’s a fossil: a marvellous section of verse preserved by the amber of oral formulaic recitation to go down through the centuries unchanged.

It might seem a bit strained to apply this analogy to the catalogue I’m presenting here, but consider the parallels. In 1974, and then again in 2002-2004, a concerted effort was made to collect the living voices of New Zealand’s most prominent poets. Many were undoubtedly missed out on both occasions. Sometimes this was through adverse circumstances: illness, or lack of contact details. Others chose not to participate. But, in any case, very full collections were made, and have now been deposited in two of New Zealand’s great libraries: The Special Collections Department of Auckland University Library, and the Alexander Turnbull Library in Wellington.

In 1974 a triple LP of selected tracks: New Zealand Poets Read Their Work (parts 1 & 2) and New Zealand Poets Read their Work for Children, was issued shortly after the collection work had been completed. The three editors, Jan Kemp, Jonathan Lamb and Alan Smythe, selected tracks by 41 of the 52 poets recorded. The entire collection of recordings was deposited in the Turnbull library at the end of this process.

From 2002 to 2004, 171 poets recorded their own choice of their best work in the four major centres of New Zealand. Fuller details of the procedure are given in the Introduction to the Aotearoa New Zealand Poetry Sound Archive written by Jan Kemp and myself in 2004. Suffice it to say that a vast amount of material was collected and edited in these two years: the process of collection was initiated and organised by Jan Kemp, the editing of the sound files was overseen by Mark King, the editing of the text files by me.

So I’ve felt ever since we completed our work in 2004 that even our collaborators were not really aware of the full extent of these two collections, only very partially reflected in their published offshoots: the three 1974 LPs and the three AUP CD / text anthologies. In order to remedy this, I’ve thought it useful to provide here a complete catalogue of the contents of both archives, listed alphabetically by name of poet, but also (at the end) indexed by audio-CD number.

This, then, is our NZ “Catalogue of Bards.”

Poets were asked to provide us with pictures, texts and bio/ bibliographies as part of the 2002-4 collection process. Most did so, and that information is reprinted here with minimal revision. I’m happy to update the bibliographies (particularly) if anyone wishes me to, but otherwise I’d like to see this collection as a diachronic section of New Zealand poetry at two crucial dates: 1974, towards the end of the 60s-70s poetic ferment here, and 2004, as a kind of backwards look over travelled roads: the twentieth century in New Zealand culture.

What I’m presenting here is, admittedly, already out of date. Five years have passed since the bulk of the recordings were made for the AoNZPSA. Hence the analogy with Homer’s ship-catalogue.

Out of date, yes; inconsistent with other information elsewhere in the poem, definitely – but intensely revealing to posterity in unforeseen (and probably unforeseeable) ways. No doubt further visual and audio collection efforts will be undertaken in future, but these two archives, nevertheless, have a consistency and integrity of their own.

Above all, it’s important they be accessed and enjoyed, as their makers wished them to be. A bard is an oral performer, and recordings must be listened to in order to come back to life.

There are 196 poets (27 of those recorded in 1974 were recorded again in 2002-4) represented here. You’ll have to go to one of the two libraries mentioned above to listen to the actual CDs, but at least you can now see what is included in this vast repository of tracks and texts and what’s not.